Culture and hiking in one place 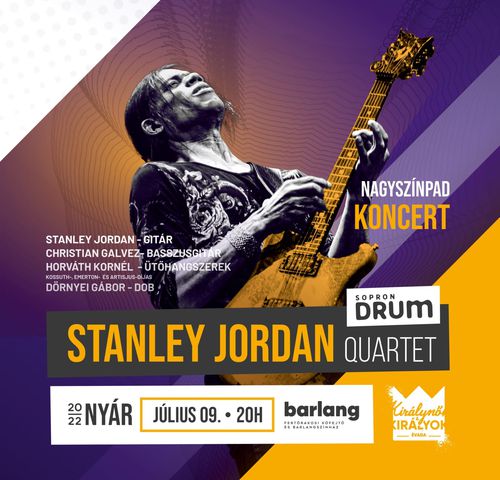 Stanley Jordan is a real chameleon: open minded, with a powerful fantasy. He is known for his special eight-finger “tapping” technique. His career began in 1985, since then he impressed his audience again and again through his bold adaptations of classical works, his discoveries about pop hits, or his ultramodern improvisations that push the boundaries of jazz. One of the companions at the concert will be the bassist, Christian Galvez from Chile, who played together with Billy Cobham, Stanley Clarke and Dennis Chambers, and Stanley Jordan is part of the Gary Willis, Dominique di Piazza and Hadrien Feraud and also member of the Masters of Bass band. Because of his lightness and melodic playing, many people think that the virtuoso musician plays actually a guitar with bass strings. From the tHUNder Duo, the two Hungarian artists, Kornél Horváth and Gábor Dörnyei also will be playing with Stanley Jordan. Gábor Dörnyei is one of the most sought-after drummers in Europe as a soloist, session musician and teacher. His 2017 film DRUMEO raised him to excellence, like Peter Erskine, Bernard Purdie and Billy Cobham. Kornél Horváth, Kossuth Prize winner artist is well known to the Hungarian public, but he is also famous abroad: in 2016, readers of British Rhythm magazine voted him the “Percussionist of the Year”. We can safely call him one of the most original Hungarian performers, who has a unique impact technique and in his play he excitingly combines Hungarian musical roots jazz, with Indian, Arab, African and Latin American influences.